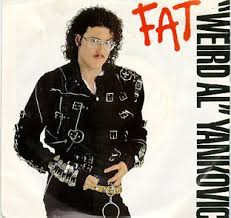 I have been asked a few times to do a Weird Al 20 20 countdown. Well, this week marks the anniversary of the release of his first album in 1983, last week we remembered his first tv appearance in April 1981... and 2018 marks 40 years in music for Weird Al... so that's 3 pretty good reasons to pay tribute to one of the world's most unique entertainers. So join us as we play the top 20 hits parodied by Weird Al, and we'll get a taste of his take on those songs.... and no suprise that his 2 biggest chart hits are at number 1 and 2 in the Weird Al 20 20.

Tuesday - We visit a turbulent time in the UK!

We're visiting the week when a geneal election was taking place in the UK, marred by industrial disputes and tough times. At the end of it all.. it was the contender they called the "Iron Lady" who got the job. Almost amongst the hits from this week in 1979, there's the end of the Cylons for now.. we'll remember a tv ad to celebrate the year of the child... and our number 1 hit comes from a group who started with the name "Pheonix Press". Find out who that was when we play the top rom  late April 1979.

To commemorate ANZAC Day, it's a 20 20 Retro Countdown celebrating Australian and New Zealand music. Join us for the top 10 Kiwi artists followed by the top 10 Aussies, to give us the greatest 20 arists from the "lands" down under. Along the way too, more of the other great things from either side of the ditch.

Thursday - Getting fit with the hits of this week in 1982!

This countdown takes us bake to the week when Jane Fonda released her first work out video. So we'll remember that amongst the top 20 of late April 1982. There's also the end of a popular UK Sitcom.. And there was another first for NASA. At the top of the chart was the theme to a popular TV show at the time about a school teacher who was visited by aliens. More on that when we get to the top of our chart from this week in 1982.

Friday - The Life Countdown is back!

Yes, we'll give our top 20 hits about life a second lease on life. 20 songs with life in the title from the Talk Talk song that was covered by No Doubt to the big hit from a movie that came with very strict instructions. A few life lessons and 20 life hits on Friday's 20 20.